“Joyce and I think making a donation to the University of Arkansas is really making a donation to the entire state – in fact to the entire country. When it was suggested that we might help in creating a new performing arts center for the university, it seemed like a good opportunity to combine our appreciation of the arts with our love for the University of Arkansas.”

A Gateway to Great Journalism

University of Arkansas Student Media heads Ashlyn Brothers, Beth Dedman, Alex Nicoll and Chase Reavis have broken free of the basement. The four journalists and their peers previously shared a common space in the underground floor of Kimpel Hall, where they gathered to manage and participate in media such as UATV, The Arkansas Traveler newspaper and Hill Magazine.

“There were no windows in the old space,” said Brothers, the station manager for UATV. “And there was no awareness of us by other students because of the old location.”

Dedman and Reavis, the respective current editors-in-chief for Hill Magazine and The Arkansas Traveler, also worked in the old space through their involvement with the campus’s magazine and student newspaper. Dedman’s assessment of the office was “not functional,” and Reavis described it as “cramped.”

Nicoll, former editor in chief of the Traveler, said they affectionately called the basement space “The Dungeon,” but Student Media has since moved to a new location that he describes as “wonderful.”

The new space is the Sue Walk Burnett Journalism and Student Media Center, and it truly is wonderful. Thanks to a $1 million gift from U of A School of Journalism and Strategic Media alumna Susan Walk Burnett and her husband Rusty Burnett, students now have the opportunity to work in a facility that promotes connection and collaboration, as opposed to cramped creativity.

“It feels like a professional news outlet,” Nicoll said. “It was my home away from home. It’s where we wanted to be when we didn’t have other obligations.”

Reavis agreed, “The new space makes it easier to work. I’d rather be in the office now.”

“We can learn from each other,” Brothers said. “We’re not in silos. We’re allies and can help each other. Plus, people see us! We have windows, which helps us feel connected. People are curious and asking questions. It’s raising awareness.”

Nicoll, who earned an internship at the Houston Chronicle after graduation, said the collaboration he experienced in the new space helped him become a multi-faceted journalist and advanced his skillset for the workforce. He now feels confident that he can go into any situation and have a working knowledge of all forms of journalism.

Dedman loves how editors, like herself, have room to spread out and claim their own areas.

“There are plenty of breakout spaces, which are ideal locations for interviews,” she said.

Brothers sums up the new space by describing it as a gateway. She says it has opened her eyes to being a Student Media head and has pushed her to be even more excited and passionate about being a journalist.

“I adore this new facility,” she said. “It’s every bit as good as a real live station. It creates lasting friendships and…just…magic. It’s a safe and inclusive environment that allows our creative juices to flow.” 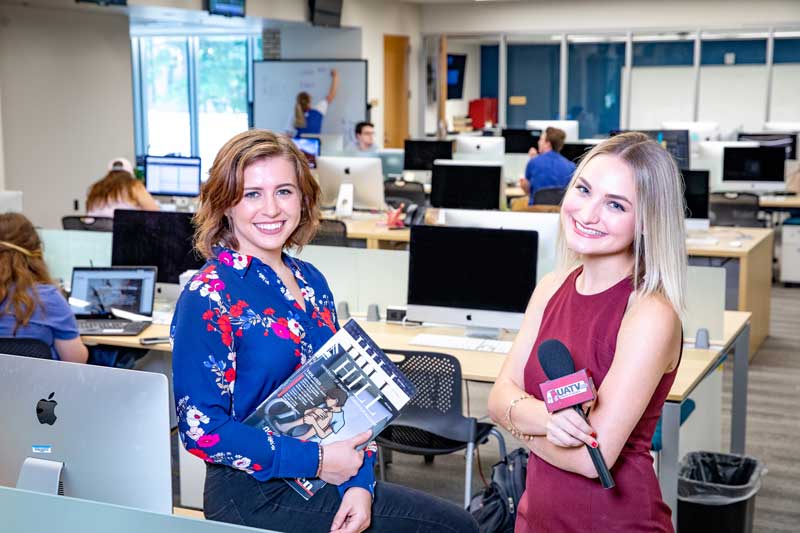 Give Now to Support our Facilities